Thank You for your consideration... 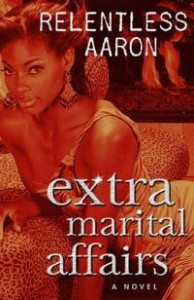 Self-publishing street lit phenomenon Aaron (To Live and Die in Harlem) serves up a smoldering batch of raw erotica and criminality. Mason and Adena Fickle area black suburban couple trying to put distance between themselves and their hardscrabble roots; Mason is an accountant with disciplined work habits and a bullheaded attitude about making a good living for himself and his wife, Adena, and to keep things “creative” at home, the two engage in increasingly kinky sex. But when Loween, the third member of their threesome, chokes to death on Mason’s copious ejaculate, the Fickles find their aspirations in jeopardy after the shady, wheelchair-bound Sid, claiming to be Loween’s cuckolded boyfriend, appears on their doorstep and reveals Loween wasn’t who the Fickles thought she was. As much a story about the sexual taboos of middle-class America as a cautionary tale about the dangers of “going white,” a taboo of upwardly mobile African Americans, Aaron’s book mines Mason’s and Adena’s internal lives fairly well, though the plot has its share of ridiculous turns, and characters are more notable for their extreme natures than for their depth. It won’t make many Mother’s Day gift lists, but Aaron’s latest is a full-throttle tour of a sordid world. (Sept.)

When Mason and Adena Fickle find their new sex partner, Loween, dead in their bed just hours after the threesome’s hot and raunchy escapade, they discover the woman was neither who nor what she’d said she was. The ménage à trois should have been nothing special. After all, the Fickles have already tried it all. But Loween’s death brings an unexpected visitor and the streets to their doorstep, and soon things get out of hand.
Can Mason and Adena regain control of their lives? Is it too late to call on love and commitment in this time of desperate answers and urgent decisions?
In this spicy, sexy, and dangerous new tale, Relentless Aaron—one of the hottest forces in street fiction—will keep you guessing till the end.