Another Random Starbucks Story by Relentless

For years I’ve been keeping tabs on you Starbucks coffee fans! Here’s another short Starbucks story from yours truly

END_OF_DOCUMENT_TOKEN_TO_BE_REPLACED

Thanks Again To All My Fans & Friends!

I stay grateful to my fans & friends

END_OF_DOCUMENT_TOKEN_TO_BE_REPLACED 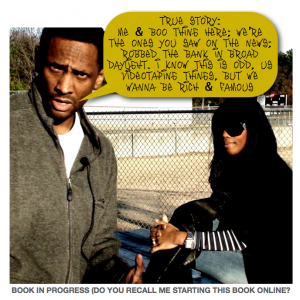 IF YOU CAN’T HANDLE THE TRUTH, YOU’D BETTER NOT READ THIS!

The truth, FRIENDO, is you can’t write worth a fuck! And its not merely your writing, but your story has no substance. Its full of hood-speak and nuances that are of interest to people who are shallow in their own life’s discovery. In other words, all they wanna hear is vulgarity, sex, and all about any relation to the dead cycle they’re caught up in. They have no interest in growing, or expanding beyond their environment because they’re stuck on the nail; they’re even comfortable on the nail, just like your writing. I would LOVE to sit here and encourage you, but you need some tough love. You need a kick in the ass! And besides, that wouldn’t be keeping it real!
AND THERE’S MORE!
You have no sense of perspective. You’re writing is all one-dimensional, as if you (the wannabe writer) are God. If you were God, you might have something important and relevant to talk about in your book. And you don’t even hafta be that to be an effective writer; how about just being able to command a reader’s attention with a cohesive paragraph? Hint: if I hafta read that paragraph twice to understand it, you are not cutting the cheese. And how about learning about plotting, tempo, building a character? How about having a voice? You don’t have a voice, friendo. What you are is a town crier, not even loud enuf for the town to hear you. So then, you’re an apartment crier, talkin slick in the mirror/gangsta-grillin in your dreams; stuck in a room that’s not even officially ghetto. If you wanna spend your life tryna “keep it real,” you might wanna show us that (instead of tell us) and become a real writer. You might wanna go back to the drawing board, pick up on some mastery, so your writing won’t continue to be such a mystery.

YOU ASK: “What’s the drawing board consist of, Relentless?”
I RESPOND: “I’m so glad you asked!”

*Okay, so that’s harsh. And I don’t act that way all day/everyday. What I meant to say was—in my kinder/gentler voice—there’s so much I’ve written over the years in my many blogs that can help you, the aspiring author. So read it, put it to use. And maybe you can come up out that hole in the ground that you think is a writer’s world, that you think is a solid foundation of things you know or which you have been through, when in reality its quicksand.

Shout out to the real gangsters who’ve managed to ignore all the bullshit people print in books.

Also of interest to authors!
GROWING & BLOWING: HOW I WENT FROM AWARD-WINNING AUTHOR, TO FILM MAKER