MURDER. SEX. CHAOS: EVERYONE IS TO BLAME

EVERYONE IS TO BLAME: ACCEPT IT OR NOT, we are ALL part of the problem, whether you are a descendant & beneficiary of
slavery/entitled by the benefits of being White, whether you “got over” on a real estate deal years back, maybe over-financing your property (and never got caught)… if you own some business and you’ve over-charged for your products or services, then you “took” from the available resources that human beings need to grow/to survive… maybe taxpayers had to pick up the slack. I remember many years ago a good friend of mine was in position at SEARS, and he could easily allow things to “leave the store” at pennies on the dollar. My ethics (and his) were way less than scrupulous at the time, but in hindsight I can see that if Sears was taking that sort of hit all over the nation, it could indeed lead to the reason why Macy’s is ahead of them in earnings, or why Target and Walmart are industry leaders, and not Sears. There were times I got free gas fill-ups from “friends.” There were plenty of times I was fed for free at this restaurant and that… how about over-pouring at the bar. Never did I think about “who’s paying for this?” Never did I consider reciprocity, available resources or replenishing. That only comes with maturity & awareness. Call it “growing up” if you want to, but you and I both know people who are still acting like adolescents, taking things that don’t belong to them. They con’t know how to contribute and earn, so they take. And therein lies the imbalance in resources, and the interrupt in Universal Law. The “Circle of Life.”

Family, I was no angel in my past, but I know that KARMA has its place. I know that no matter what SOMEONE had to clean up after me and my dirt… after you and your choices that taxed someone/somehow. That’s right, these are the checks and balances of life.

You might romanticize music and think James Brown’s “Sex Machine” is hot. But the truth is it pushed the envelope and helped to make “sexin'” the norm. We’re humans, and we’re here to procreate, yes. But we have the ability to think civil & not carnal. We have the ability to “reason” and not wild-out. We can even exercise logic.

But dirt is done on many levels, whether you’re aware of it or not. If you agreed with Elvis and his girations or James Brown and his “Sex Machine” on stage, you’ve endorsed and helped to fuel the “sexual revolution” that today finds the floodgates wide open with men calling women bitches and worse. You’re the reason there is excessive porn, and women selling their bodies… if you enjoy and repeat the music or the videos that re-enact sex in the content, whether its Janet or Prince or even Salt ‘n Pepa… if you enjoy or romance movies with violence and have repeated lines from the vicious Scarface, or the criminality in Cat Ballou… even if you rejected these platforms altogether and you are the squeaky clean mirror-image of Jesus Christ, and you’ve perhaps denied these artists, these ideologies and the like, (yes if you’ve turned your back on those who did not know the way or those who were wild while searching for a way), you too are culpable of and responsible for the state we find ourselves in today. The reason why the youth of the world are “out of control” is because of what we practiced Its because of our routines. We went from Englebert Humperdinck, Barry Manilow and Sinatra, to Madonna, Snoop Dog and comparing women to jeeps. We are enabled to be the worst we can be, without enforcement/up until we cross the line.

Don’t like the mass shootings of Sandy Hook? AWE, WHAT A FUCKIN PITY, because YOU’RE THE SAME ONE WHO SUPPORTS STEVEN KING! Did you know that Steven wrote THE BLUEPRINT for the Sandy Hook killings? 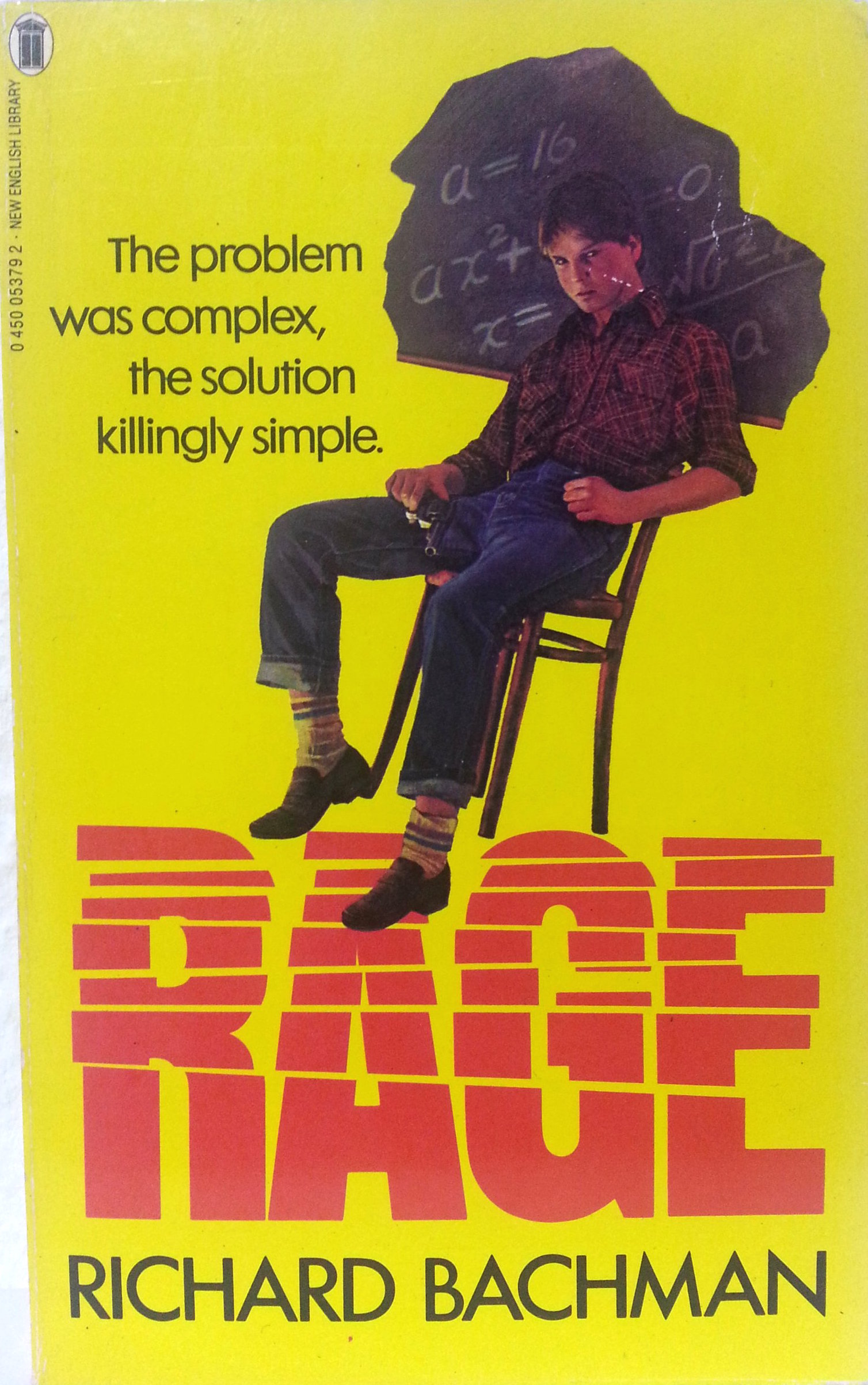 Steven King’s Bachman book series is the foundation of the worst that can happen. Want to read about Sandy Hook? Ready RAGE, written decades ago. #Blueprint

How about 911? Are your panties in a bunch because people flew airplanes into skyscrapers? Where in tarnation do you think they came up with that? Could it be the X-Files TV show/spin-off called “The Lone Gunman”? Could it be the Tom Clancy novel “Debt of Honor“? If you don’t like the gun violence amongst gangs (whether they are from the streets or wearing uniforms), then you have yourself to blame, since YOU TOO have MEMORIALIZED “THE GODFATHER” and you ROMANTICIZED. How about “True Lies” and “King Kong“? “TRAINING DAY.” You don’t like women getting raped, or young girls getting peed-on by grammy award winning singers, AND YET YOU PRAISE MONSTER’S BALL, THE COLOR PURPLE AND PRECIOUS. Who are we kidding? WE LOVE THIS SHIT UNTIL IT HITS YOUR FRONT PORCH! UNTIL WE HAFTA EXPERIENCE IT OURSELVES! You allowed THE HANDMAID’S TALE onto SCHOOL READING LISTS, THEREBY PUTTING THESE IDEAS INTO KIDS HEADS FOR DECADES. WHETHER BY DEFAULT, OR BY ROUTINE PRACTICE, PROBABLY SINCE THE DAY EVE ATE THE APPLE, WE ARE ALL TO BLAME. We endorsed the BS that has perpetuated itself for centuries, and now that the evolution is indeed televised, we are seeing it all raw and uncut, and we claim that we don’t like what we’re seeing, even tho we are WAY PAST THE POINT OF NO RETURN. And even YOU… If you turned your back on those who closely and/or purposefully perpetuate these ideas, YOU TOO ARE TO BLAME. Nobody escapes the truth of our digression, of our temptations and of our age-old routine of BEDLAM remixed for the digital age. But we’re quick to accept the progress and benefit from what we call “style” or “creativity.” You love to say, “don’t blame the messenger,” and you love to flaunt your FIRST AMENDMENT RIGHTS, that same caption from a document that is outdated and selectively enforced. But family, the reality here is there is no denying our responsibility for the way things are. And don’t get it twisted, for I too am in the matrix, growing the fruit, selling the fruit and eating the fruit. EVERYONE IS TO BLAME.

View more posts from this author
« THE HIPHOP SWIMSUIT SITE IS HERE!
5 Ways To Avoid Getting Shot-Up By A Mass Murderer »