I KEEP MY PEOPLE SHORT, AND MY PEACE OF MIND LONG by Relentless Aaron 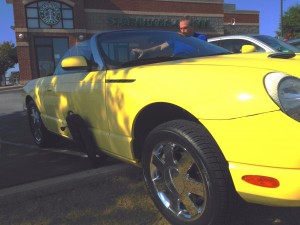 So picture of me on a Sunday morning, amped and ready to skyrocket into a Sunday of extreme productivity. In between my workload I’m often greeted by friends, associates… someone just inquired about getting a website created, and always new acquaintances are expressing interest or questioning my audacity. Naturally, all of this takes place at Starbucks here in Conyers, Georgia, my favorite home away from home, where I am set up as (drum-roll, please) #multimediaguru.

A couple of hours ago good friends who I have worked with and earned money with and have shared inspiration and tragedy with came into the coffee shop in rapid succession. Victoria, my favorite financial planner and soccer-mom comes in right before the veterinarians and right after John, arguably my top client. John and I have an ongoing argument because he gave me is season tickets (at least for one day) and I got to sit behind home plate at the Braves game. (See related posts from Wednesday). Well, long story short, the first inning is where a brawl started on the feild; what I considered to be unnecessary. “To be continued” on this discussion, and John eventually makes his way out of the coffee shop, grabbing hold of the steering wheel of his priceless convertible Chrysler.

As I do so often, I sort of watched him make his safe exodus from the Starbucks property. Almost. Just as I was about to run out and take a picture of 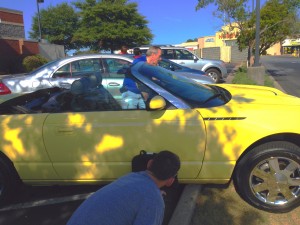 John/him in his brilliant shiny lemon yellow Chrysler, he drives forward and the car goes over a high curb. #Stuck #embarrassing

But I know more about John than the average onlooker; I know he runs multiple businesses, has dozens of people who’s lives depend on him; this is a successful man who is generally upset by nothing and nobody. He’s not only a decision-maker but he’s a shot caller and very much in control of his finances, his health, and the confrontations that abound. Not to mention, our conversations are always hype. It’s a beautiful Sunday, with not a care in the world. So, maybe Mr. Universe was watching and decided “Hey, lets throw a wrench in his day and see how he handles it.”

Naturally, I immediately move out to assist. I am unsure if I am going to lift the car over the curb, push it while he throws it in reverse/mashes the execrator.  All I know is that there is no backing down from the inevitable solution; a solution that required focus, patience and no paranoia. My immediate conversation was “okay, no problem, so lets see how we’ll fix this minor issue.”

“John, we need a jack.” And the jack appeared. “John, we can do this” It didn’t matter if I had to push or lift or give him a ride to go get his 5000hp monster truck. I just felt comfortable knowing that this was doable. 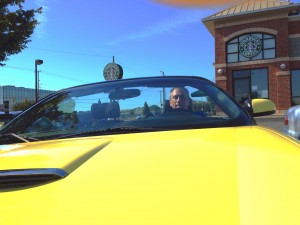 “No” or “Can’t” or “won’t” was not an option. John has been there for me on so many occasions during my rise here in Conyers, whether its mending me cars, barbecues at his house, hiring me for this or that filming… there was the fundraising event that I filmed for his sister last year. Just so much history.  Sidenote: John is not only a good friend but those are his season seats at the Braves game/last Wednesday.

Thing is, now that I think about it, I’ve helped many many people who have been #stuck for one reason or another. A guy couldn’t get his car alarm to stop the other day.

Theres always a need for a gas can, jumper cables, etc. Somebody always has problems getting online, or they need a battery charger, or whatever. Its the default position I have here at the shop; by choice, and it keeps me human, and in contact with people on a grass-roots level. And Lord knows how I need that in my life, considering what I’ve been thru. 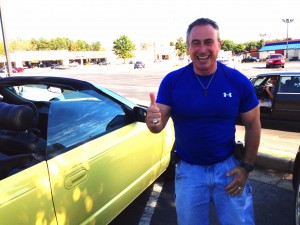 The thing I’ve always known about John is that while he can be hot tempered, but in most instances he is at peace. It could have been because he was at the gym earlier, or running his 200 acres, or feeding his mules and horses. There are so many responsibilities John has that I can’t fault him for this morning. Meanwhile, John is not only a hard worker, but also at peace in his life, and I witness this most everyday/not merely at the coffee shop. That peace of mind is one I’ve seen in my friend Steven Juliano, own

er of Bentley’s & The Shadow (in NYC), as well as so many other successful individuals I’ve come to know. John has taken the time to get a fallen hawk back in the air. He’s helped Luke, the homeless (and helpless) cat that once made Starbucks his home, if by his scent alone.

He got Luke a roof over his head for a year and even got him to see an eye doctor, as well as he got him reading glasses. Those are some of the deeds I’ve witnessed; imagine the ones I don’t see. 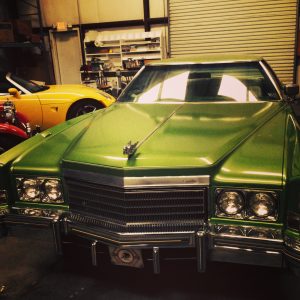 Before the car went over the curb, this morning’s Relentless-rant was gonna be called “I keep my people short and my peace long.” Well, the former pro

wrestling Hall of Famer John is short and he is at peace; so I called it right! No paranoia. No anxiety. No problem. John and myself and third-party pushed and lifted and got that car out of the rutt and he drove away relieved. And in the same way, this is my Sunday morning rant: not angry not hostile and not controversial… Just very much at peace in Conyers, Georgia