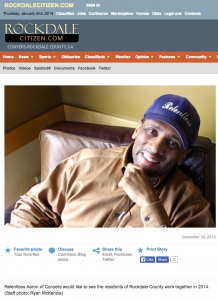 Interesting thing about marketing, brand-building and having “the formula:” it seems everything (yes, EVERYTHING) tends to fall into place like clockwork. Dr. Wilder (my chiropractor/client of all people) says this morning (right after “cracking” my neck and back) “You have the formula, and you’re lucky. Just continue giving people value.” I think about that and it really sticks. That is what I do everyday; I give “value.” I go above and beyond the call of duty. I am quite “selfless.” and the love in return is unmatched. I don’t know how to explain it, and I care not to. This has happened all my life, how I’m this “magnet” of energy that draws “goodness & mercy.” When I was supposed to die, I didn’t. When I was supposed to lose, I won. When it seemed like there was no answer, an answer came. I can ball it up into what I call “my secret.” But that might be too commercial for you to accept. (Some of you, anyhow.) But the truth is in the results, the response and the blessings that come with all that. I have been in the absolute most remote places on the planet, and I have been blessed in those places. I have been dealt the most death-defying odds over and over and over again. I use to have sleep apnea, and have crashed vehicles 5 times. FIVE. No, scratch that… it was FOUR times. The FIFTH TIME, I actually recognized how I was falling asleep, and I let my niece/a licensed driver to take the wheel. In the passengers seat, knocked out, I hear a crash, I’m jolted into the reality that we were in that FIFTH accident. Yes, (John Wayne voice) “get the fuck outta here death!” There was the time I randomly climbed Bear Mountain in upstate NY… just took a random drive, off season, found myself climbing up the mountain… 3 hours later I run into a devoted Relentless Reader AT THE TOP! Just WILD!

And then there is the press… it’s as if THEY are hunting ME!

Even if by coincidence, the New York Times article, the Daily News Article… both of those feature stories were RANDOM! I was minding my business, on the corner of 58th street, selling books, when the NYT Reporter, Cory, seized MY moment and jumped on the Relentless historic bandwagon. The Daily News reporter did the same when I was on the corner of 34th & 7th selling books. BOOM. Page 11. And for the record, you either gotta kill somebody, or BE killed to get on any of those first 10 pages of one of the worlds largest newspapers.

Well, the trend carries on; in 2010, WORLDS away from NYC, in Conyers Georgia, some of the locals call the police because I’m in Starbucks too much, because my computer’s too big, and because my motor home is too big. Well, that sent the police callin, which subsequently sent the newspaper reporter over, and that resulted in a front page article in the Rockdale Citizen, a paper where many racist, unfriendly remarks were posted in the un-policed/unbridled OpEd section. That article, complete with photo, made it to the front page of the paper on Christmas day 2010. (Exhale) And now this, the other day… I thought nothing of it when the kid walked up to me and asked “What are your wishes for the New Year?” And here we go again, back in the paper. I get press and I don’t even try. I wish I could find a dedicated woman as easy. Just sayin! #relentless