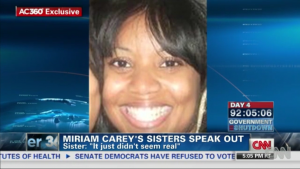 Recent events relating to Miriam Carey, the dental hygienist who drove from her home in suburban Stamford Connecticut all the way to DC to crash her car into the White House barricade have me asking a simple question: are we trigger-happy?

Okay, considering all the "further investigation" and that she has a short history of mental illness, I get it that this was a troubled woman.

But if we lined up every troubled person in the USA there'd be a mass murder/televised. 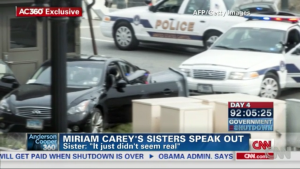 And yes, there are various "levels" of troubled people; some who just imagine harm on other people, others who take the threats to the next level with the help of mail or telephone or Internet, and then there are the extreme cases, such as Miriam. Clearly, the automobile is a deadly weapon. And how she used her vehicle (even endangering her child) is quite the horror story. But I ask this question of everyone: WHY DIDN'T THEY SHOOT THE TIRES???

And then there is the environment we live in: clearly, the world is experiencing code red.

Maybe this isn't happening in your town, but family are there bombings and mass murderers and stabbings, and at least one person set themselves on fire today. But we are living in troubled times, clearly affected by 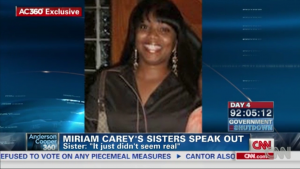 events that take place around the world. (Or maybe those on the movie screens?) Unless you are cold and callous and could care less, a dorm full of college students fast asleep who are suddenly shot to death has to make you sad. But of course, so many of us get sudden amnesia when the violence doesn't reach our doorstep. And there are others of you who are on the same page with me; tuned-in and crystal-clear about the state of the world. We need reminding that every human being matters no matter where you live. And yes, even Miriam Carey mattered. 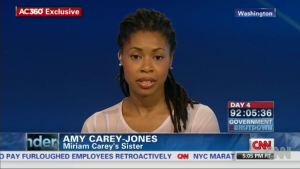 Yesterday's events detail that Miriam Carey was clearly deranged to the point where she crashed her car into a Federal landmark and then (while under fire) raced away, not to mention her one-year-old child in the car. An event like this has got to make you think. It has got to make you wonder. What woman would execute such an act with her one-year-old child in the car? Yes, a crazy woman. Or at least one that has "gone mad." As far as I know, a mother's natural maternal instinct is to protect her child. So, for one to import her child into extreme danger (gunfire in this case) is clearly "overboard."

But how do we even get to assess Miriam Carey's mentally competency since she's dead? I mean, when police

shot her was she shooting back? (no) Did they see a weapon? (no). Who knows what the truth was, and who will ever know?

These super cops that were quick to blow this woman away even after she raced away from the White House (in my opinion) jumped the gun, influenced by our "code-red world." Obviously, considering the recent shootout at the Washington Navy Yard, DC is super hot, easy encouragement for those cops to pull the trigger as opposed to blowing out this woman's tires or crashing another vehicle into her so that she could not move that car anymore. Yes there could've been a bomb in the carbut if there was a bomb in the car what other options are there? There are so many unanswered questions in 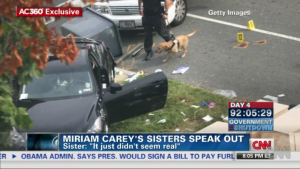 this equation but it is clear to me that there was some trigger happiness going on. Police officers are supposed to be the least paranoid of all gun-slingers. And I can imagine that with all the films out about the White House being "taken down" and "invaded" that any White House threat is a serious one, even if only in the imagination. But right now I'd love to imagine these officers shooting out this woman's tires and taking away the only weapon that she had. I'd like to imagine her under a doctor's care, alive, talking about how "Barack was sending her telepathic messages." What a ball Michelle would have tossing that idea around in her head.

Instead, now we have a child traumatized for life. And it took this to get her away from her mother. That is the biggest plus and minus in this equation.